The contract level sets a specific target of tricks that must be won to make the contract: –

Points awarded for contacts made: –

(Slams will be dealt with later) 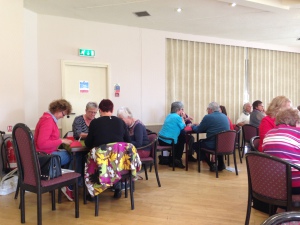 NV = non vulnerable (green on the boards) – if the declarer fails to make a contract 50pts are given to the defenders for each trick not achieved. Points awarded for bidding and making a game are lower (400/420)

V = vulnerable (red on the boards) – if the declarer fails to make a contract 100pts are given to the defenders for each trick not achieved. Points awarded for bidding and making a game are higher (600/620). Caution is needed when competing for a part contract when vulnerable e.g. down two tricks = 200pts. which is more than the opposition would get for making their part game (PASS is often sensible)

To begin play, the defender on the declarer’s left makes the opening lead. In more formal play, the opening leader does so by first placing the card face down on the table to afford his partner an opportunity to ask questions about the auction, then faces it when partner has no further questions. This practice also allows the defender to return the card to his hand without penalty if the lead is not his to make.

Remember always to reflect what the bidding has been before choosing your lead card.

There are two steps in choosing the lead against a NT contract:

Choosing the best suit to lead is the most critical aspect. Once we’ve decided on the suit, selecting the appropriate card is usually a matter of rote.

In no-trumps you are trying to establish a suit; and part of this process is maintaining communications with partner, so it’s much more of a patient waiting game – less emphasis on the actual lead of an honour, more about trying to eventually benefit from the length of the suit.

The key to choosing the best suit to lead is to listen to the auction. The standard guidelines are:

The opening lead can often be critical to the success or failure of a contract, so it’s important to get off to the right start whenever possible. There are two aspects to the opening lead:

Against a suit contract it’s usually the first two rounds of a suit that are important, and consequently it’s often correct to concentrate on the quick trick taking potential of a suit – i.e. honours. Subsequent rounds are less important, since there is a high probability that they are going to be ruffed in any case.

One golden rule of bridge – on the opening lead never under-lead an ace against a suit contract.

If you do under-lead an ace, this may enable declarer or dummy to make a singleton king. Also following this rule enables partner to make the correct play in the following situation:

Against a suit contract West leads ♠5 (a low card – implying that he has an honour). Dummy plays ♠4. ‘Knowing’ that your partner would not under-lead the ♠A, you must play ♠10. If instead you played the ♠K, you present declarer with two spade tricks instead of one.

Remember to always reflect what the bidding has been before choosing your lead card.

The key to choosing the best suit to lead is to listen to the auction. The standard guidelines are:

Leads against a contract