The dummy spreads his/her hand on the table with each suit in a column from highest to lowest facing the declarer, customarily with any trump suit on declarer’s left and the colors of the suits alternating. The rules of play are similar to other trick-taking games, except that the declarer directs the play of cards from the dummy in addition to playing cards from his own hand. Dummy is allowed to try to prevent declarer from infringing the rules, but otherwise must not interfere with the play; for example, dummy may attempt to prevent declarer from leading from the wrong hand (by stating, e.g., “you won the last trick in dummy”) but must not comment on opponents’ actions or make suggestions as to play. 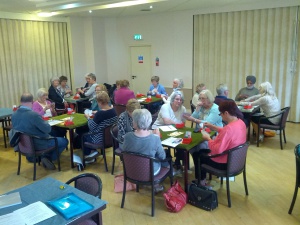 The hands play clockwise around the table, and each hand must “follow suit” (that is, play a card of the suit lead to the trick) if able. A hand that cannot follow suit may either “ruff” (play a trump) if there is a trump suit or discard (play a card of any other suit). The hand that plays either the highest trump or, in a trick that contains no trumps, the highest card of the suit led to the trick wins the trick for its side and proceeds to lead to the next trick. The play continues until all thirteen tricks are played. The declarer or a defender may “claim” the rest of the tricks by showing his hand and stating how he will take them.

In duplicate bridge, each player retains the card played from his hand to each trick and lays it on the table turned in the direction of the side that won the trick, thus keeping the hands separate to return them to the board at the end of play.

If upon reviewing dummy after the opening lead, declarer assesses that he does not have enough tricks immediately available to make his contract, he can try to develop additional tricks through a variety of methods. These include:

A discard occurs when he/she are no longer able to follow the suit that has been led. A discard should be used to send a signal to the partner about a suit that you have strength in and would like your partner to lead should your partner win a trick.

However, we are going to learn an alternative method where a discard gives a suit-preference signal (“McKenney”).

First, let’s establish what constitutes a suit-preference discard. It is the play of a card directing partner’s attention to some other suit. That other suit is never the suit led or the suit discarded, and in suit contracts it will never be the trump suit – on which the discard is most likely to occur. So, in a suit contract, it will be one of two other suits.

There have been 2 rounds of Spades played and the hand below has no more Spades. What card does he/she discard to signal to his/her partner his best suit?